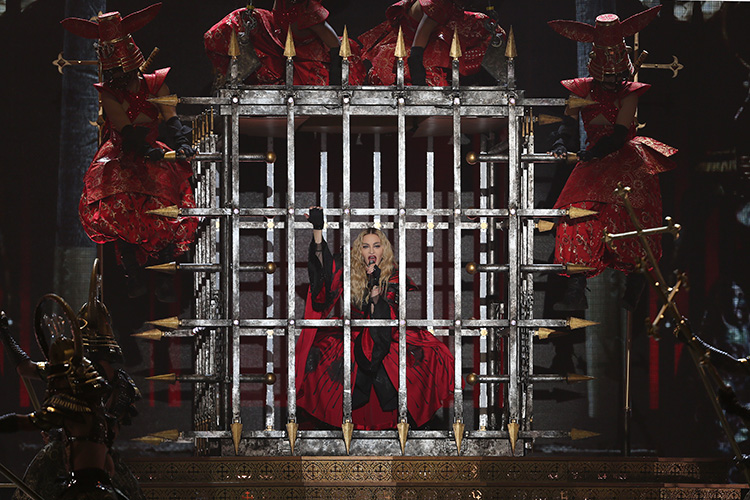 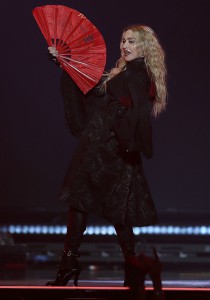 The original Queen of Pop seems to be making a habit of arriving unfashionably late to her own sold out parties these days, but after subjecting her devoted fans to the questionable selection of a house DJ spinning far too much really bad music as an opening act, Madonna returned to the SAP Center in San Jose on Monday night with an indisputably fabulous career spanning performance further enhanced by spectacular choreography at every turn.

Looking suitably toned, and certainly not your average 57-year-old mother of four, Madonna was surrounded by a trio of brilliantly sharp large video monitors that flashed imagery throughout the evening ranging from Mike Tyson and his collaboration with the shows opening number ‘Iconic’ to a multitude of colorful visual alterations of album artwork and other snapshots from her three decade long career.

Finally taking the stage at 10:15, she proceeded to deliver a two and a quarter hour set that featured samurai warriors carrying ten foot long gothic crosses as a caged Madonna descended to a stage filled with matadors, gypsies and geishas awaiting her arrival to kick off a performance joined by up to 20 backup dancers costumed in such an extensive variety of beautiful and exotic outfits that they would put the grandest of any Cirque Du Soleil creation to shame, even if it came close to matching all of the religious and sexual symbolism to be seen before the night was over.

Opening with two of the nine cuts she’d ultimately play from “Rebel Heart”, rush released in March after being leaked while still in demo form by hackers, Madonna next strapped on a Flying V electric guitar to take her fans back to 1983’s ‘Burning Up’ from her self-titled debut album. Dropping to her knees with perfect timing for a solo during the “Do you wanna see me down on my knees? / Or bending over backwards now would you be pleased ?” verse was a sign of how spot on the production was.

Wasting no time engaging the crowd with but a pair of many depravities the evening would provide, the always provocative and first ex-Mrs. Sean Penn used a giant cross as a stripper pole and later writhed around on an elaborate re-creation of the Last Supper table as she moaned, “Yeezus loves my pussy best” during “Holy Water” surrounded by skimpily clad nuns before following up with “Devil Pray” and it’s inspirational “And we can do drugs and we can smoke weed and we can drink whiskey. Yeah, we can get high and we can get stoned. And we can sniff glue and we can do E and we can drop acid” lyrical message.

Following ‘Body Shop’ from the new album, conducted under the backdrop of an illuminated 24 hour gas station complete with stacks of tires that were shuffled around the stage as she gyrated on top of the hood of a vintage Chevy, Madonna was joined by a dozen of her dancers seated on the front steps of the main stage surrounding her for a stripped down acoustic version of ‘True Blue’ with a ukulele, a nice touch for a song she hadn’t played since 1987, a year after its release.

For ‘Like A Virgin’, Maddy strutted to the front of her uniquely shaped stage. A catwalk shaped like a cross that extended close to 40 rows into the audience, with the farthest tip bearing a phallic heart shaped appearance. Or as Madonna said, “It feels so intimate down here at the tip of my penis. Isn’t it interesting that a heart and a penis are the same shape ? God didn’t make a mistake on that one. In my opinion, it’s all about the dick.” She continued her rendition by humping the stage before concluding by provocatively thrusting the microphone into the front of her pants.

A diverse crowd of young and old, gay and straight was next treated to ‘La Isla Bonita’ with an all female ensemble that didn’t appear to miss a step dressed in matador styled attire . ’Dress You Up’ continued to showcase the cast in a cavalcade of brilliant colors and morphed into a medley including snippets of the gems ‘Into The Groove’ and ‘Lucky Star’.

By the time the song ‘Music’ toasted the host venue with a verse from ‘Do You Know the Way to San Jose,’ Madonna had reappeared in 1920’s-style Gatsby lounge singer garb with the backdrop of a gleaming Paris style cafe, a full on dance party had broken out and overtaken the arena. The fully raging spectacle continued with ‘Candy Shop’ being performed on both sides of the cross shaped stage for each sector of the house before returning to an elevated main stage for ‘Material Girl’ where Madge proceeded to dance with each of her eight tuxedoed male suitors before tossing them off the ledge of the stage one by one until she remained alone.

Approaching it’s conclusion as the show passed the two hour mark, Madonna refused to go off into the night quietly, proceeding to tell the still very amped crowd how filled she was with happiness, and that happiness is contagious and that she hoped that they shared in it with her. Actually, the conclusion of her exact quote was “You know the word penis is inside of the word happiness, and there’s a lot a happiness in penis.” Such a shame that she wasn’t able to coordinate schedules with the Pope during his recent visit so they could’ve shared their views on Catholicism.

What some have called the self-descriptive reggae tinged ‘Unapologetic Bitch’ was the penultimate song of the evening, Madonna returning for the single encore of ‘Holiday’ from her debut album to conclude a thoroughly enjoyable and near perfectly executed lavish performance which saw her exit the stage for the final time by being lifted up into the air on a trapeze to a well deserved standing ovation as the video screens behind her flashed, and she voiced, ”Bye Bitches !!!,” no doubt safely returning her to her throne.